It is a turnkey solution with a modular design. The advantages of this modular cleanroom system is the possibility of expanding a cleanroom with increased demand by changing the layout, size or shape or by removing the cleanroom.

With the industry’s largest selection of modular clean room wall systems, EzadCleanroom can satisfy the requirements for any application with the most cost-effective solution. Our unique ability to mix and match components from both our clean room and implant office product lines allows us to provide a consistent look while utilizing components that will meet all requirements cost-effectively.

We offer a variety of standard and custom panel options ranging from steel to fiberglass that can easily integrate with our wall systems, depending on your specific application or requirements. 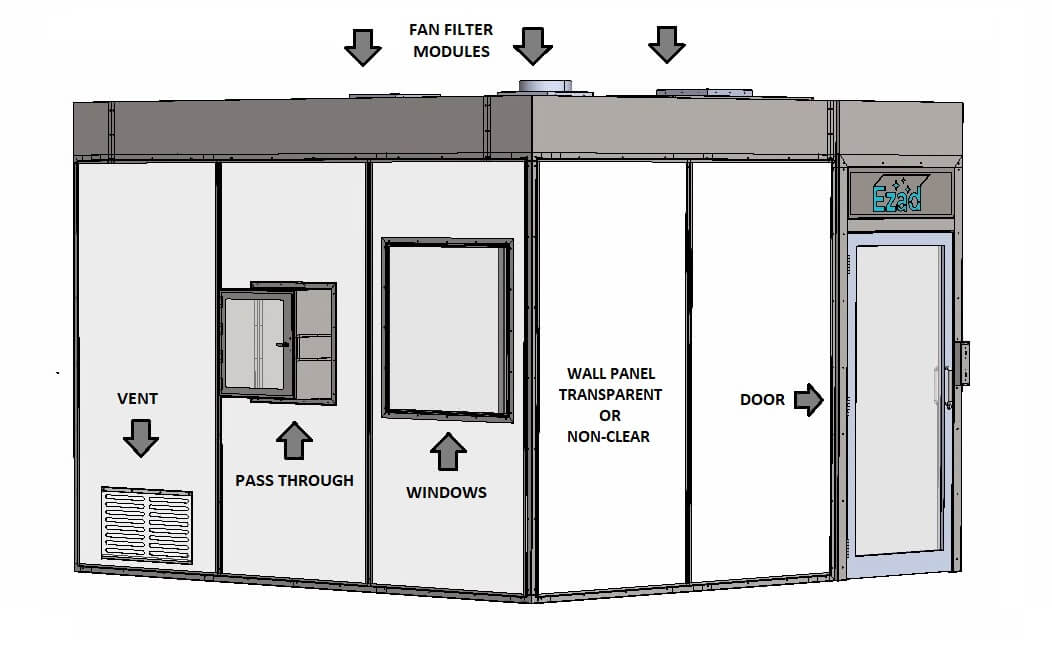 Advantage of Modular cleanroom compare to a traditional cleanroom

The most crucial and perhaps first option when building a new cleanroom is to make it modularly or conventionally. Each of these choices has various advantages and disadvantages, and the perfect match to your cleanroom application may be challenging to determine. Here is our opinion of modular versus conventional cleanroom buildings.

Modular construction is the most acceptable solution for flexible scenarios. Unable to disassemble and move traditional construction. Nor is it as flexible as a modular design, which permits minor adjustments such as deletion and addition of a few panels. Instead, you have to remodel, pull down walls and so on. You can select from a very flexible softwall cleanroom with temporary curtain-like walls and the Rigidwall or Hardwall cleanroom with thick, more solid wall panels depending on the purpose and classification of your cleanroom.

Depending on the size, budget, categorization and usage of your space, the modular building might be less costly than traditional construction. This applies in particular to temporary cleanrooms or smaller cleanrooms. For example a softwall cleanroom can be the ideal choice for applications such as clean storage that require little space and comply with the least demanding cleanroom requirements because it is typically less expensive than the structure.

Traditional construction can take months, but modular construction is considerably faster, as all components have already been built. Modular cleanrooms require the members to be manufactured according to your specifications instead of using raw materials. In a few days or weeks, modular construction may be finished to enable you to operate as rapidly as possible.

In addition, although traditional construction would need the employment of specialists nearly always, your staff may often build a modular cleanroom on-site using the instructions of the manufacturer. Installation services may be provided at a minimal charge or as part of the modular design package for cleanrooms.

Since modular cleanrooms are created non-progressively, they may be readily altered without the waste and clutter with traditional constructions.

Modular cleanrooms are easy to extend because all the requirements are adding a wall, ceiling and floor system. Traditional construction can require the removal of old barriers and techniques to make rooms for new buildings.

When looking for modular cleanroom options for your company, you have undoubtedly found the words “Hardwall” and “Softwall” while discussing various cleanrooms. However, what is the difference between the two cleanrooms? And how can you figure out the one that best meets your needs? Read More